Hillsdale College and the 4th Michigan Infantry at Gettysburg

As many of you may know, I am a proud alumnus of Hillsdale College, a small liberal arts school nestled in the rural countryside of southern Michigan. Hillsdale has a long tradition of being a place of dedication to liberty and freedom, a tradition which stretches all the way back to the American Civil War. Before and during the war, Hillsdale was widely known as an abolitionist college, and its record of sending young men to fight in the Union army was truly remarkable. I hope to tell some of the stories of the students from Hillsdale who left to fight, as well as to write of the remarkable status Hillsdale had as a college of equality. Yesterday, while riding my bike through Gettysburg, I saw an area in southern Pennsylvania that made me think of my Alma mater many miles away...


In 1861, the nation was caught up in the fervor of an oncoming war, and patriotism was the order of the day. Thousands and thousands of men from across both the North and the South left their homes, families, and livelihoods to take up arms in the burgeoning struggle. Many of those men who left were leaving behind paths of education and study. Hillsdale College was not immune from this grand exodus to the armies. Founded in 1844 by Freewill Baptists, by the start of the war, Hillsdale was a small yet thriving institution. It held a unique distinction as the first four year school in Michigan to admit students regardless of race, religion, or gender. As one historian wrote of Hillsdale in the early 1900s, "Hillsdale College has been a pioneer in the educational reforms of the age. From the first it has given the same advantages to the colored race as to the white. It was the first college in the State, and one of the first in the country, to admit ladies to rights and privileges equal with gentlemen." (Quoted in Arlen K. Gilbert, Hillsdale Honor, 4).

With such a strong foundation of patriotism and an abolitionist ideology, many Hillsdale students left to join the Union army at the outbreak of the war. One student, writing years later of those who left Michigan noted, "Each man, each boy, felt that the appeal was to him, that the call for men was the cry of Father Lincoln to his boys to gather at Washington; to rally around the home and flag..." (Ibid.). Over the course of the war, Hillsdale sent as many men into the ranks of the Union army as did the undergraduate programs at the much larger University of Michigan. Hillsdale can claim having sent over 500 students into the Union armies; among this group were three generals, three colonels, five lieutenant colonels, and three Congressional Medal of Honor winners. In the 1880s, the college newspaper estimated that over 200 of Hillsdale's student soldiers died during the conflict. While that number is inflated, many students from Hillsdale did give their lives during the war.

One unit which contained an especially significant number of Hillsdale students was the 4th Michigan Volunteer Infantry. Company E of that regiment was comprised solely of volunteers from Hillsdale, Michigan, many of them coming from the college. The 4th Michigan was in the 5th Corps of the Army of the Potomac, and saw action in many of the most devastating battles in the Eastern Theater. Of the many battles in which they participated, the men of the 4th Michigan saw perhaps their greatest testing of courage on July 2, 1863, in the Wheatfield at Gettysburg.

Late in the afternoon on July 2, the 1st Corps of the Confederate Army of Northern Virginia, led by Lieutenant General James Longstreet, made a massive assault upon the southern end of the Union line. For several hours, the fields along the Emmitsburg Pike south of Gettysburg saw some of the fiercest combat in American history, and the 4th Michigan was right in the thick of it. Union Major General Dan Sickles had moved his 3rd Corps in front of the rest of the Union line, and as a result suffered heavy and devastating losses. In the course of trying to stop the Confederate assault, the portions of the 5th Corps, including the 4th Michigan and the rest of James Barnes's division, were positioned near a wheatfield belonging to John Rose's family. From this point on this field would be known solely as The Wheatfield. The 4th Michigan met the attack of Brigadier General Joseph Kershaw's brigade of South Carolinians head on, and a chaotic fight ensued. Over the course of the next several hours, fierce Confederate attacks met desperate Union counterattacks, as portions of the Union 3rd, 5th, and 2nd Corps fought in this area. As portions of the line began to fade away, the 4th Michigan soon found itself surrounded on 3 sides and taking heavy casualties, forced to retreat towards Cemetery Ridge. In the course of their retreat, their 26 year old commander, Colonel Harrison Jeffords saw the regimental colors fall to the ground. Rushing over to save the colors, Jeffords was speared with a bayonet and spent his last words calling for his mother. Over the course of the several hour long fight in the Wheatfield, the 4th Michigan lost 175 out of its 300 men. Gettysburg historian and author Harry Pfanz, in his excellent work on the fighting on that 2nd day of July, 1863, wrote, "The Michigan men stood like rocks but fell like sheep before the slaughter" (Gettysburg--The Second Day, 257).


Today, in a peaceful field in southern Pennsylvania, among an ocean of granite memorials to soldiers and heroes of many years ago sits a monument to this gallant group of soldiers, some of whom were from Hillsdale, Michigan. The monument depicts a likeness of Colonel Harrison Jeffords, clinging to the same flag for which he sacrificed his life. 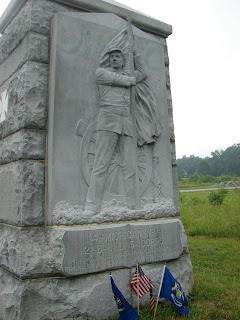 Monument to the 4th Michigan, with the Wheatfield in the background 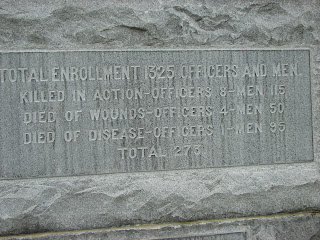 ﻿
Enrollment and casualties from the entire war 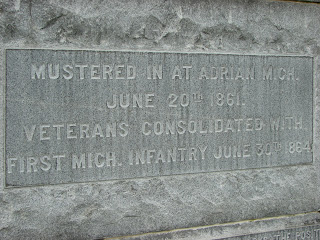 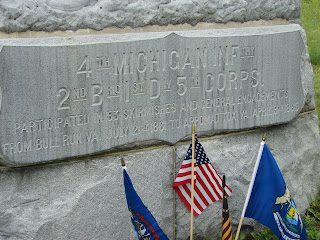 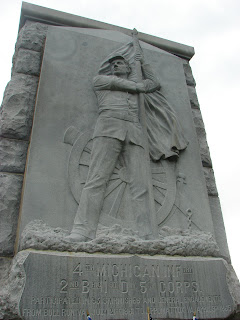 Colonel Harrison Jeffords and his flag﻿

Hillsdale College holds many proud distinctions, but being able to say that some of their students valiantly fought and died in the Wheatfield at Gettysburg is among the greatest and most honorable. Hillsdale students fought on many battlefields throughout the war, but on none did they suffer more severely than at Gettysburg.
Posted by Dan Vermilya at 9:42 PM