In my post from yesterday, I featured some pictures of the National Cemetery at Shiloh interwoven with a brief recounting of the cemetery's story. As was the case with Civil War National Cemeteries, only Federal soldiers were reburied there. While many battlefields saw Confederate dead later removed, they were often moved to either local cemeteries or to cemeteries in the South. For example, the Confederate dead from Antietam are scattered between cemeteries in Shepherdstown, Hagerstown, and Frederick, as well as some that were sent to their home towns in the South.

Shiloh is relatively unique in this respect; the Confederate dead remain on the field, the majority of them in large burial trenches. Grant's orders of April 8th dictating that the dead be buried as quickly as possible applied to both sides. As Federal forces held the field, more care was given to the burial of the Union dead, and in most cases, efforts were made to identify the fallen. However, where Union dead were either buried individually or in small groups, Confederate dead were often placed in shallow graves or mass graves. Often these mass graves were made in spots where the fighting was the heaviest. It was simply quicker, easier, and more efficient to place Confederates in mass graves near the scene of battle.

While as many Union dead as possible were removed to the National Cemetery after the war, post war antipathies overruled arguments for combining the dead of both sides into one cemetery. Confederate soldiers had just waged a four year struggle against the Union, and in the late 1860s, the Federal government was not about to let them be buried alongside loyal Union soldiers. While attitudes of brotherhood, friendship, and bipartisanship between the North and the South grew among veterans of the war toward the end of the century, attitudes which we still largely recognize today, the wounds of battle were still far too fresh in the war's immediate aftermath to allow for Confederate dead to be included into a National Cemetery.

Thus, Confederates were left in large burial trenches across the landscape. As many as twelve such burial trenches exist at Shiloh, yet not all of the locations are marked or known. Early park historians knew the locations of nine such trenches, but the park only currently knows the exact marked location of five, the others all being lost to time. Thus, the battlefield itself is a cemetery for those Confederates who fought and died at Shiloh. With over 1,700 dead, the Confederate army suffered a staggering toll on the now peaceful fields surrounding Shiloh Church.

Needless to say, the presence of such burial trenches significantly affects the feel of the battlefield. All Civil War fields are to some degree still burial grounds because there is no definitive way to ever completely rebury all soldier's remains from such vast and complex landscapes. However, Shiloh can literally claim to still be a burial ground. Whether one is driving along the tour road or hiking through the woods, a Confederate burial trench is not far away. This is not to mention the countless numbers of individual or small group burials which still dot the landscape, unmarked and lost to time. These burial trenches serve as a reminder of the enormous and often forgotten sacrifices made by Confederate soldiers during the Civil War. 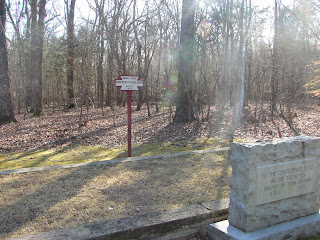 Each of the five marked Confederate burial trenches at Shiloh has a similar look. They are very plain, having only an official marker (seen up close in photo below) and a small stone monument from the United Daughters of the Confederacy. Many of these UDC and Sons of Confederate Veterans markers and monuments date back to the early decades of  the 20th century. The burial trench pictured above has nothing other than these simple markers to indicate its existence. 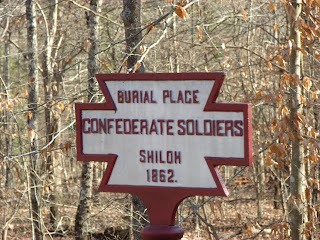 The burial trench located above is the closest known burial spot to the final Federal line on the evening of April 6th. 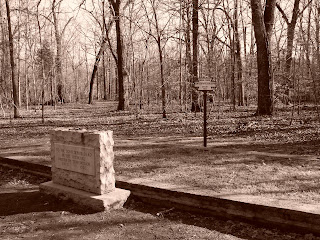 With no ability to determine the number of bodies or the identities of the individual soldiers, these burial trenches represent something very powerful on the Shiloh battlefield. National Cemeteries with row upon row of graves provide a visual reminder of the steep price paid for the Union and freedom, but for the Confederacy, these burial trenches provide a small, humble reminder of the lives lost in a cause that was ultimately lost as well. 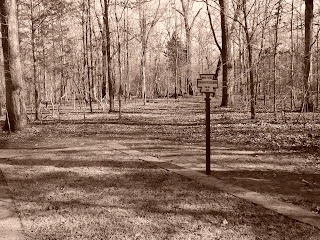 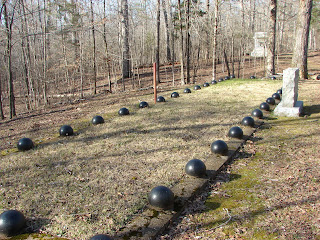 The above photograph is of the largest of the known burial trenches. According to one very helpful Shiloh Park Ranger, the trench pictured above contains as many as 700 soldiers. 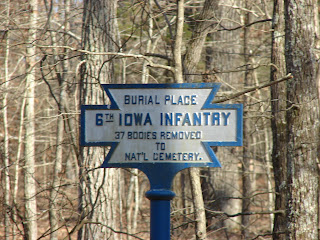 Just because Union dead were removed to the National Cemetery does not mean that their original burial grounds are unmarked. As seen above, small markers dot the landscape indicating where various regiments buried their dead in the immediate aftermath of the battle. 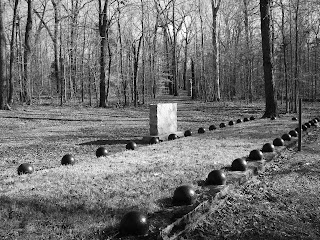 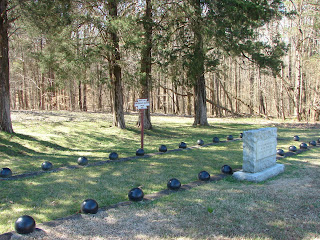 The burial trench pictured above can be found in Rhea field, within 100 yards of the camp site of the 53rd Ohio, commanded at Shiloh by Colonel Jesse Appler. This regiment was in the Third Brigade of William Tecumseh Sherman's Fifth Division, and its camp was the furthest south of those with Sherman's main body of troops. Thus, they were among the first Federal soldiers in Sherman's command to be engaged in battle on the morning of April 6, 1862 (more on Sherman at Shiloh to come).