James Garfield and the Civil War: For Ohio and the Union


I am excited to say that a project which I have been working on for a little over a year is now almost finished. With a publication date of November 2, 2015, I am pleased to announce the publication of my second book, James Garfield and the Civil War: For Ohio and the Union. The front and back cover are below: 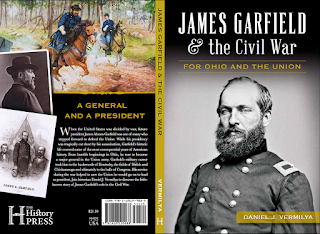 This project, being published by The History Press, focuses on the Civil War career of native Ohioan and 20th President of the United States James Abram Garfield. I have been fascinated by Garfield for many years, having grown up just a short 20 minute drive from his home in Mentor, Ohio. Over the past few years, I have gotten to know the staff at the James A. Garfield National Historic Site, and have had the pleasure to do some volunteer work there, taking part in the park's Major Battles of the Civil War lecture series. It is a great NPS site, and I encourage you to visit there if you are ever in the Cleveland area.

While other presidents who served in the army during the Civil War have had books written which chronicle their service, no such books exist for the military career of James A. Garfield. From 1861 to the end of 1863, Garfield served in the Union army, raising a regiment of Ohio troops, leading men in combat in Kentucky, taking part in the second day of the Battle of Shiloh, sitting on a court martial of a prominent Union general, and serving as the Chief of Staff for the Army of the Cumberland. His Civil War career was as eclectic as it was important. Garfield had a hand in several of the war's most important battles and campaigns, and his experience shows how hard work and perseverance allowed a man born in a log cabin in the old Western Reserve of Northeast Ohio rise to become a major general in the Union army.


This book tells the story of Garfield's Civil War service, following him through the conflict and examining the role this famous Ohioan played in our nation's most trying hours. While the focus is on his time in the army during the war, I also discuss his early years and career before the war began, as well as his post-war political career, and how the Civil War had a continuing impact for the rest of Garfield's life. Garfield held many titles throughout his life, but none was more meaningful to him than "General Garfield." While Garfield's presidency was tragically cut short by his assassination in 1881, twenty years earlier he bravely donned his country's uniform and took part in the American Civil War. Just as the war changed the United States, it also changed the lives of those who took part in it. James Garfield was among them. His post-war political career and his eventual rise to the presidency were made possible by his heroic service to the Union cause during the Civil War.


I hope to post more on this forum in the coming weeks and months, sharing more regarding the life and Civil War career of James Garfield and the publication of the book. Stay tuned for updates!

Posted by Dan Vermilya at 3:43 PM No comments: