Because of his tragically short presidency, there were many things which James Garfield did not have the opportunity to do as President of the United States. One of those was to declare a national day of thanksgiving. This was a long standing tradition in American history, but it had been formalized into an annual event ever since 1863, when President Abraham Lincoln called for the fourth Thursday in November to be a day of giving thanks. In the years before Garfield's presidency, the president had issued a proclamation in October or November declaring a day of Thanksgiving. Unfortunately, by that point in 1881, Garfield had died of wounds from his assassination.

Thus, it was up to Garfield's successor, the 21st President of the United States, Chester A. Arthur, to issue a proclamation of Thanksgiving that year. On November 4, 1881, Arthur issued the following proclamation, declaring November 24, 1881, 134 years ago today, to be a day of thanksgiving for the nation, just over two months after Garfield's death.

By the President of the United States of America
A Proclamation

It has long been the pious custom of our people, with the closing of the year, to look back upon the blessings brought to them in the changing course of the seasons and to return solemn thanks to the all giving source from whom they flow. And although at this period, when the failing leaf admonishes us that the time of our sacred duty is at hand, our nation still lies in the shadow of a great bereavement, and the mourning which has filled our hearts still finds its sorrowful expression toward the God before whom we but lately bowed in grief and supplication, yet the countless benefits which have showered upon us during the past twelvemonth call for our fervent gratitude and make it fitting that we should rejoice with thankfulness that the Lord in His infinite mercy has most signally favored our country and our people. Peace without and prosperity within have been vouchsafed to us, no pestilence has visited our shores, the abundant privileges of freedom which our fathers left us in their wisdom are still our increasing heritage; and if in parts of our vast domain sore affliction has visited our brethren in their forest homes, yet even this calamity has been tempered and in a manner sanctified by the generous compassion for the sufferers which has been called forth throughout our land. For all these things it is meet that the voice of the nation should go up to God in devout homage.

Wherefore I, Chester A. Arthur, President of the United States, do recommend that all the people observe Thursday, the 24th day of November instant, as a day of national thanksgiving and prayer, by ceasing, so far as may be, from their secular labors and meeting in their several places of worship, there to join in ascribing honor and praise to Almighty God, whose goodness has been so manifest in our history and in our lives, and offering earnest prayers that His bounties may continue to us and to our children.

In witness whereof I have hereunto set my hand and caused the seal of the United States to be affixed.

Done at the city of Washington, this 4th day of November, A.D. 1881, and of the Independence of the United States the one hundred and sixth.

CHESTER A. ARTHUR
President of the United States

JAMES G. BLAINE,
Secretary of State
Posted by Dan Vermilya at 10:00 AM No comments:

Email ThisBlogThis!Share to TwitterShare to FacebookShare to Pinterest
Labels: James A. Garfield, Thanksgiving

Wanted to share an interview I did with the folks at the Mentor Channel in Mentor, Ohio, the home of the James A. Garfield National Historic Site. I did a talk and book signing there last week, and Ante Logarusic stopped by before hand to do a short interview on the book.
﻿
Posted by Dan Vermilya at 1:57 PM No comments:

November 2, 1880 was an important day in American history. Across the United States, the final votes were being cast to determine who would become the 20th President of the United States. James Abram Garfield, a longtime member of the United States House of Representatives and a former Major General in the Union army, was the Republican candidate, while Winfield Scott Hancock, himself a former Major General as well, was the Democratic nominee. Over 9 million votes were cast for president that year, representing 78% of the eligible electorate, the highest number of voters to turnout up to that time in American history. Once all the votes were finally tabulated, James Garfield of Ohio was the victor.

Garfield spent that day at his farm in Mentor, Ohio, greeting well wishers and handling his daily business of overseeing his farm. That night, he was in the small campaign office behind his home, receiving updates on the polls from across the country. When he retired for the evening at 3 a.m., Garfield had heard good news regarding the results of voting in the Northern states. By the morning of November 3, Garfield knew for certain that he had been elected President of the United States.

Garfield's election to the presidency was the crowning achievement of his life. Unfortunately, his grand story of rising from poverty and a log cabin all the way to the White House is marred by its tragic ending. Nine months to the day after his election, President Garfield was shot twice in a train station in Washington, DC on July 2, 1881. One bullet hit his arm, and the other lodged in his back. He did not die from his wounds right away. Instead, he suffered immensely for several months while doctors did everything within their power to treat him and remove the assassin's bullet from his back. Ultimately, their efforts were unsuccessful, only augmenting the infection and effects of his wound. On September 19, 1881, Garfield succumbed to his wounds, making him the second president to die from assassination.

While these events are no doubt historic and important, they often overshadow other parts of Garfield's life and legacy. Eighteen years to the day before his death, Garfield was a general in the Union army, serving as the Chief of Staff for the Army of the Cumberland at the Battle of Chickamauga, one of the great battles of the American Civil War. Garfield's Civil War service, at Chickamauga and elsewhere, is often a footnote in his life story. Far from a small piece of his story, Garfield's Civil War career was essential to who he was and to his rise to the presidency. 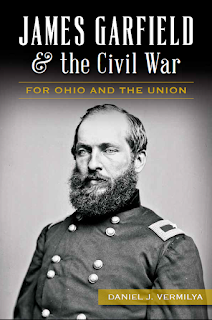 I am pleased to announce that today, on the 135th anniversary of Garfield's election to the presidency, my new book James Garfield and the Civil War: For Ohio and the Union is now available. Today is the official publication date for the book, and in it, I hope to tell a part of James Garfield's story which has languished in obscurity for far too long. The book is not an exhaustive look at Garfield's life on a day by day basis, but rather, it tells the story of his Civil War career, placing the future president in the larger events of the war from 1861 to 1865, focusing on his service in recruiting the 42nd Ohio, commanding troops in the field in Kentucky and Tennessee, taking part in political fights in Washington, serving as the Chief of Staff for the Army of the Cumberland in 1863, and ultimately taking his strong views about preserving the Union and abolishing slavery to the halls of Congress. Garfield's Civil War service saw him take part in several of the grand campaigns and battles of the war. He crossed paths with leading figures like Don Carlos Buell, William Rosecrans, George Thomas, Edwin Stanton, Salmon Chase, and Henry Halleck. Along the way, Garfield made friends and enemies, and he experienced his share of highs and lows during the war. Like all veterans, his Civil War service lingered with him through the rest of his days. Even when he was the Republican nominee for president, many still knew him first and foremost as "General Garfield."

I hope you enjoy the book! I will be doing several book talks and signings in Northeast Ohio this upcoming weekend and next week. If you are in the area, I hope to see you there!

Posted by Dan Vermilya at 10:46 AM No comments: