"Which side was fighting for slavery?"


During my Orientation talk yesterday afternoon, a couple from Australia was sitting right up front. Half way through the talk, I paused to see if any of the visitors had questions. The Australian gentleman raised his hand and asked, “Forgive me for not knowing this already, but which side was fighting for slavery?”

I thought this gentleman's question was really interesting. In the United States, the Civil War is still an active event in some ways. For most of us, we could be described as having a “dog in the fight,” depending on where we were born, where we grew up, where we live, where our ancestors are from, so on and so forth. Yet, this gentleman from another country didn’t have any concerns about the moral implications of the conflict on his own heritage. He simply wanted to know perhaps one of the most important things about the Civil War. Which side was fighting to perpetuate a slave based society, a slave based economy, and a slave based government, and which was fighting to preserve the Union and give freedom to four million people.

I told the gentleman that it was the Confederacy which seceded over the issue of slavery, and it was the Confederacy that, if they won, would perpetuate slavery and spread the practice into new areas. A few visitors from Texas in the back noted their disagreement with me, but, they were about as polite and cordial as one could possibly expect (I wish all visitors were as friendly when disagreeing with me!). I had a great conversation with them after the program.

Later in the day, a bus of visitors from the Netherlands stopped by the Visitor Center, and after conversing with them, as well as with the Australian gentleman’s question in mind, I have to say: I truly enjoy talking to visitors from other countries. It is, perhaps, one of my favorite things about being a park ranger. The perspective that travelers from across the world bring to American history sites, especially those of the Civil War, give us an outside glimpse of how the world views our history.

Now, I’m off to another day of working the best job in the world.
Posted by Dan Vermilya at 8:29 AM 2 comments:

Good to be Back

There has been a paucity of new posts on here lately because things have picked up. A few weeks ago, it looked like I would not have any Park Service work this year because of the Federal Sequester. Yet, right before Easter, I received word that I would be coming back to Antietam!


So, last week, I moved back to Maryland and returned to work for the 2013 season. I don't have an internet connection where I am staying, which limits the posts. Thus, I wanted to post a short note to let everyone know I am doing quite well. I have some other new and exciting news about my 2013 season to share on here very soon, news that only adds to my great relief and gratitude for the opportunities I have right now. The paperwork isn't finalized, so I will hold off on sharing this news for a little while yet.


In the meantime, here is the view of Antietam's Bloody Lane at sunset from two days ago. I am very blessed and fortunate to have the opportunity to continue working here and doing what I love. God is very good, indeed. I'm taking each day at a time, knowing that every day is a blessing. 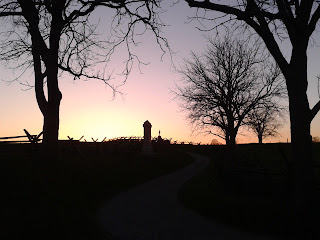 Posted by Dan Vermilya at 2:55 PM No comments: