On June 27, 1864, William Tecumseh Sherman's massive army made a daring and futile assault upon Kennesaw Mountain, roughly 20 miles north of Atlanta. Sherman was frustrated after weeks of slow moving trench battles around Kennesaw, and decided to break the stalemate with a grand frontal assault against Confederate lines. The well entrenched Confederates met the Union attacks with a deadly barrage of infantry and artillery fire, decimating the Federal ranks. On that day, over 4,000 men would fall, and the vast majority of them were Union casualties. One part of the battlefield where the fighting was especially fierce was an area now known as Cheatham Hill. It was here where Union brigades commanded by Colonel Dan McCook and Colonel John Mitchell made a fierce attack against well fortified Confederate troops commanded by Major General Benjamin Cheatham. This hill saw desperate and brutal combat, and at the end of the day, the remaining Union attackers lay in a shallow trench they had dug to protect themselves from deadly rifle and artillery fire, not more than a few hundred yards from their enemy. Their charge would be viewed by many as one of Sherman's greatest mistakes as a commander during the war, yet, their feats that day still stand as a reminder of what courage, bravery, and duty truly mean.


On the morning of June 27th, before his men made their ill fated assault, Colonel McCook, a native Ohioan, stood before his brigade and recited the following lines from Thomas Macaulay’s poem “Horatius:”

Then out spake brave Horatius
The Captain of the Gate:
To every man upon this earth
Death cometh soon or late,
And how can man die better
Than facing fearful odds,
For the ashes of his fathers
And the temples of his gods.[1]


A veteran of the battle later recalled the moment and McCook’s quotation, as well as the effect it had on the men of his regiment: “It was, doubtless, a spontaneous quotation, but very appropriate to inspire the patriotic feeling and, if we had been Roman soldiery, a trust in the care of the gods. It was a heathen refrain, but impregnated with love of country and kith and kin and duty owed to them all.”[2] Macaulay’s poem was fitting, for shortly after McCook recited those lines, he was mortally wounded leading his men against the Confederate works. Colonel McCook had reached the Confederate works, and was leading his men over and into them when he was shot down before his troops. McCook died several weeks later on July 17, just one day after being promoted to the rank of Brigadier General. 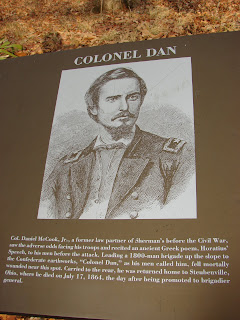