"With Unflinching Bravery...": Private Elwood Rodebaugh and the 106th Pennsylvania at Antietam 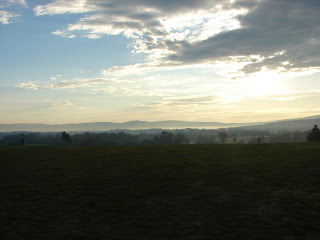 
The morning of September 17, 1862 dawned with a mist in the air left over from the rain that had fallen the night before. For Private Elwood Rodebaugh of Company D, 106th Pennsylvania Volunteer Infantry, it would be the last dawn he would ever know. Elwood was but one of thousands of men who shared that distinction that fateful morning. Soon, the mist that filled the air would be replaced with the smells and sounds of battle and death. Elwood Rodebaugh and thousands of other men from both the North and the South would become casualties in America's bloodiest day.


Elwood Rodebaugh was one of the thousands of men who comprised the Second Corps of the Union Army of the Potomac, commanded by Major General Edwin Vose Sumner. That morning, on the eastern banks of Antietam Creek, the men of Sumner's command were up quite early. Their impetuous commander had roused them at 3 AM in preparation for crossing Antietam Creek to support the right wing of the Union army in its attacks on Lee's left flank. George McClellan's battle plan called for Union attacks against Lee's left flank, to be followed up by crushing blow against Lee's right. Joe Hooker's 1st Corps and Joseph Mansfield's 12th Corps were already across the creek that morning, preparing for battle, while the 2nd Corps lay in wait on the other side.


That morning, as with many mornings in his life, Edwin Sumner was an impatient man. He had preferred that his men cross the Antietam the night before, but McClellan had taken the cautious approach of not releasing them until it was truly necessary. As the fighting began in earnest at dawn, Sumner's men sat in their camps on the other side of the Antietam, listening to the booming of the guns with a growing anxiety and apprehension of what was to come. While his men were prepared for battle that morning, it was not until 7:20, almost an hour and a half after the fighting had begun, that Sumner recieved his orders from George McClellan to begin advancing his corps across Antietam Creek. The first to move was John Sedgwick's Division. Sedgwick was followed by William French's Division. Because of McClellan's preference to have his replacement reserves ready before sending troops in to battle, Israel Richardson's Division was held back for another hour. Thus, while Richardson's men lay in waiting by the Phillip Pry house, Sedgwick began crossing his men near the Pry Mill, just south of the Upper Bridge over Antietam Creek.


Between the hours of 8 and 9 AM, Sedgwick's men, with Edwin Sumner riding along, traversed the field and hills between the Upper Bridge and the East Woods. Arriving in the East Woods near 9 AM, Edwin Sumner began to survey the situation. William French's men were still moving across the Antietam, and had been left with orders telling them to move to support Sedgwick's left upon arriving on the field. As for the moment, Sumner only had Sedgwick's division to work with. Numbering over 5,000 men, this force would suffice for the moment. Sumner recognized that Union forces commanded by George Sears Greene of the 12th Corps had given him an opportunity. Greene's Division occupied a plot of ground now covered with the park Visitor Center. Seeing these troops, Sumner decided to push due west into the large woodlot to the north and west of the Dunker Church, an area known as the West Woods. 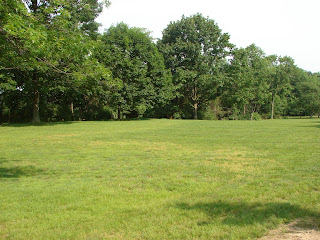 Position of the 106th Pennsylvania in the West Woods


With Willis Gorman's brigade in front, Sedgwick's division had halted, as Confederate batteries posted on Hauser Ridge began pouring shot and shell into the Federal ranks. For the men of Dana's and Howard's brigades, there was not much to do but to wait for Gorman's men to push through this fire, allowing the division to turn southward, rolling up Lee's flank. Many of the men in these ranks lay down to avoid the shot and shell, as well as to take a quick respite before their fight began in earnest. As these men lay in the woods, events beyond their control were in motion to bring about their demise.


Robert E. Lee was fast becoming aware of the need for even more troops on his left flank. All morning he had been sending any reinforcements he could find to stop the 1st and 12th Corps of the Union army. Now, 2nd Corps troops were poised to drive Lee from the field, and they needed to be stopped. To accomplish this desperate task, Lee turned to a force which was an amalgamation of several divisions, led primarily by Lafayette McClaws's division, having recently arrived from Harper's Ferry. McClaws's men were sent north from Sharpsburg, directly into the left flank of Sedgwick's unsuspecting troops.


For the men of the 106th Pennsylvania, and for Elwood Rodebaugh, the attack came fast and seemingly out of nowhere. Firing began on their left flank, as Confederate troops encountered the 125th Pennsylvania and the 34th New York, the far left flank of the Union foothold in the West Woods. The sounds they heard were what several soldiers described as a "fiery avalanche" descending upon their flank. As the fire intensified, General Sumner, sensing danger, rode back into the lines of his men to save them from their impending doom. Sumner rode direcly into the lines of the 106th Pennsylvania, proclaiming, “Back boys, for God’s sake move back, you are in a bad fix!” (Ward, History of the 106th Pennsylvania, 90). While at first confusing this for an order to charge, volleys of musket and artillery fire into their flank soon clarified Sumner’s purpose for the regiment. The men of the 106th, along with the rest of Sedgwick’s division, began to break for the rear in droves. The chaos was all encompassing. Men were firing into their own ranks from all directions.


As chaos enveloped the men of the 106th Pennsylvania, slowly but surely, bravery and courage began to shine through the confusion. Color Sergeant Benjamin Sloanaker planted the regimental colors along a fence line perpendicular to the Hagerstown Turnpike (this fence line now runs along Starke Avenue). Men began to rally around the colors, forming a defensive line, attempting to stem the tide of the Confederate advance. Among those who formed this line was Charles E. Hickman of Company A, the company Sergeant. With great bravery and coolness under fire, Hickman moved his company out of the West Woods and into the fields to the east of the Hagerstown Turnpike. There, the Pennsylvanians were joined with several companies of Massachusetts soldiers, possibly from the 15th Massachusetts, who were making their own retreat from the woods. In the process of making this stand, Sergeant Hickman paid the ultimate price and lost his life, being killed instantly by a rebel bullet (Ward, 91-2). 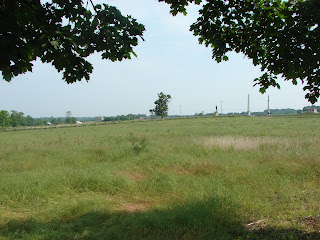 
It was also at this time that Elwood Rodebaugh, a humble shoemaker from Canton, Pennsylvania, lost his life in the service of his country. Captain William Jones of Company D would later write that Elwood “was last seen, when we commenced falling back, fighting bravely….” Two men from Elwood’s company, Samuel Riggs and Daniel Fitzwater, later testified that they had last seen Elwood along the same fence line along which portions of the regiment attempted to make a defensive stand. Jones, Riggs, and Fitzwater all later noted that Elwood’s body was not identified in the aftermath of Antietam due to his having recently shaved his beard, making him unrecognizable to burial parties. 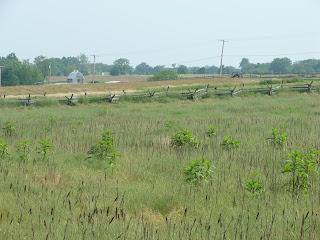 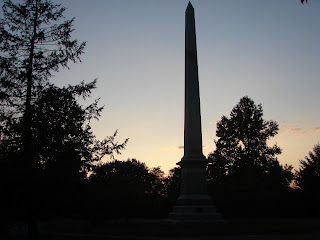 The Philadelphia Brigade monument at Antietam


For us, 149 years after the Battle of Antietam, what does all of this mean? All these years later, what is most important about Elwood’s story? I suggest that it is the element of sacrifice which makes Elwood’s story relevant for us today. Because of what happened at Antietam, Elwood Rodebaugh’s children, 3 year old Charles and 5 year old Heloise, would grow up without a father. Because of Antietam, Josephine Rodebaugh went on without her husband. While Antietam led to the Emancipation Proclamation, it also led to widows, orphans, and missing loved ones. Yet, the loss of loved ones is not necessarily a waste. Despite the sheer terror, carnage, and tragedy of Antietam, there is still a nobility to what occurred there. In a letter written for pension purposes in August of 1863, Captain William Jones of Company D noted that while Elwood had been killed at Antietam, he had performed his duty there “with unflinching bravery to wit.”

It is this description which reminds us exactly of the true nature of Antietam 149 years after the battle was fought. Because soldiers such as Elwood Rodebaugh could perform their duty with bravery under such harrowing circumstances, we have been entrusted with an incredible legacy. Antietam stands as not only one of the most consequential days in American history, but also one of the most important days for remembering that freedom is never free. Antietam reminds us that as long as freedom needs defending, Americans will rise to the challenge. The price for freedom has been paid on many fields by many soldiers, and on this day, forget not that Private Elwood Rodebaugh gave his life on September 17, 1862 at Antietam not only for the freedom of Charles and Heloise, but for the country their descendants would enjoy as well. Let us gratefully count ourselves among those descendants today.