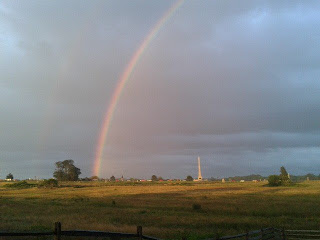 On the evening of July 2, there was an amazing double rainbow over the battlefield. I didn't capture the whole thing, but I did capture it hitting Cemetery Ridge at the point where Ambrose Wright's brigade of Georgians was hitting the Union line 150 years earlier to the moment. This is from my backyard at Codori. Simply breathtaking. 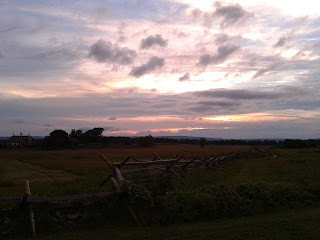 Sunset at Codori on the 2nd 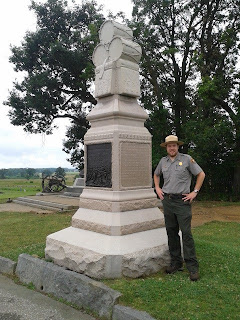 Myself at the 106th Pennsylvania monument on July 2 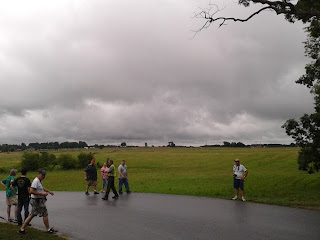 July 3 started out very rainy and cloudy. It did not bode well for the Pickett's Charge commemorative walk that day. 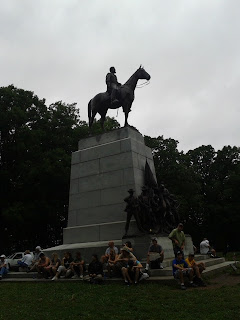 Visitors were gathering at the Virginia Memorial in the rain 3 hours before we even began organizing the separate brigades and 5 hours before the walk began. 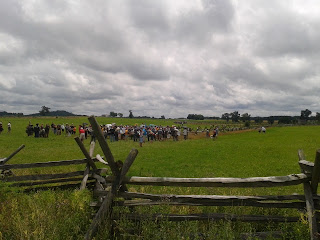 Starting at 1 o'clock, rangers began organizing visitors into brigade groups. As you can see, the sun had started to come out. This was still two hours before the walk began, and Garnett's brigade, to which I was assigned along with my friend and colleague Ranger Chris Gwinn, was already getting crowded. 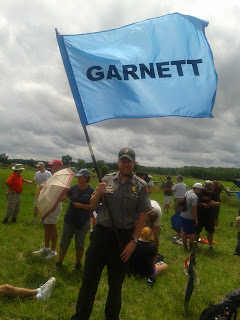 Ranger Dan manning Richard Garnett's brigade. Each brigade for the walk had a separate flag with the brigade commander's name on it. Brigades in Pickett's Division had light blue flags, Pettigrew's division had red flags, and Trimble's division had green flags. Because visitors were allowed to choose their brigades, Pickett's was the most crowded. We either had the same number or more visitors gather with us on July 3 than Pickett had soldier's in his division 150 years earlier. Again, simply amazing.

This is a panorama photo I took with my cell phone just before we stepped off. It shows Garnett's brigade in line of battle, with Ranger Gwinn walking in front. The photo is really amazing because it shows how far the brigade stretched, which was likely the length of Garnett's actual brigade. Chris and I likely had over 2,000 visitors with us, meaning we had more people walking with us on July 3 than Garnett had to make the original Pickett's Charge 150 years earlier. If you click on the image you can enlarge it. At certain points the visitors are standing six or seven ranks deep. 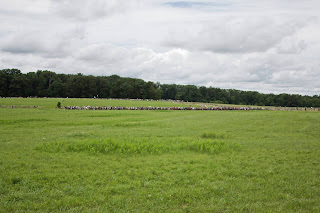 The view of Garnett's brigade from a distance just as we began to advance. 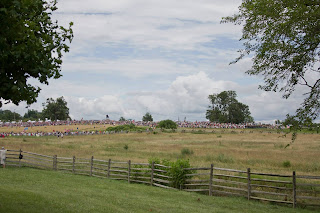 This picture does not do the sight justice. When we crested the final ridges and saw Cemetery Ridge for the first time, I heard gasps and exclamations from the visitors behind me. Chris and I tried to do informal interpretation as we advanced. I turned to the visitors, told them that those were all Union soldiers and asked them to put themselves in the shoes of those soldiers whose footsteps they were following 150 years to the moment. This moment was a far more powerful teaching tool than any ranger talk I could have designed on my own. It showed rangers and visitors alike what the march was like and what the sights were like. Knowing how many Union soldiers lay ahead and continuing on anyways brought a new perspective on these Confederate soldiers who made this assault for everyone involved, rangers included. Words really can't describe the thoughts going through our minds at this point. 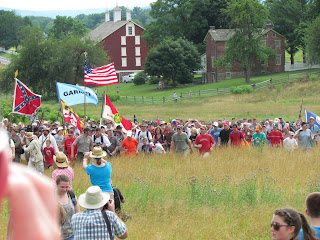 Garnett pushes forward to the wall. After reforming on the Union side of the Emmittsburg Pike, Chris and I told our group that this was the last stretch, the point where most of the Confederate soldiers fell. This was the stretch where Garnett himself was killed. The soldiers advancing from this point on leaned forward as if walking into a heavy rain storm. The atmosphere in the group was electric, and then we yelled, "Garnett's Brigade, Forward to the Wall!!!" 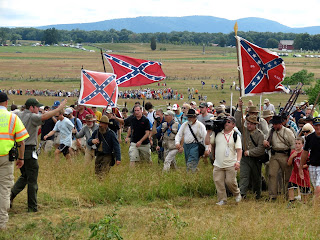 Once at the wall, the rangers stopped the advancing brigades. 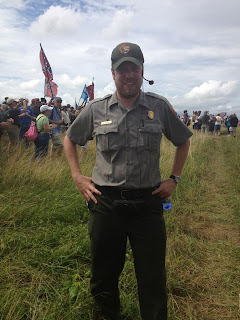 Gettysburg Foundation President Joanne Hanley caught up with me at the stonewall and snapped this pic. Thanks, Joanne! 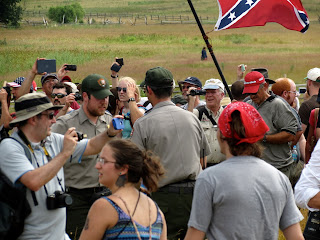 Chris and I gather for a brief ranger conference after stopping our group. 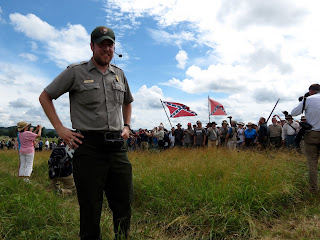 Thanks to Antietam colleague, friend, and social media team member Ranger Mannie Gentile for this shot at the wall. Yes, the Confederate battle flags do make this appear to be an SCV advertisement, but I assure you it is not. 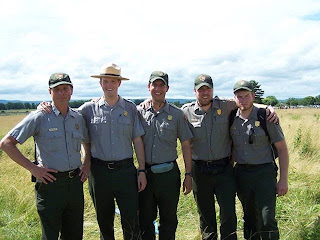 The Pickett's Charge commemorative walk was a tremendous success thanks to the hard work of everyone involved. I work with some very dedicated and talented park rangers. Pictured right to left:
Rangers Phillip Brown, myself, Chris Gwinn, Jared Frederick, and GNMP Supervisory Historian Scott Hartwig. An interesting crew indeed. 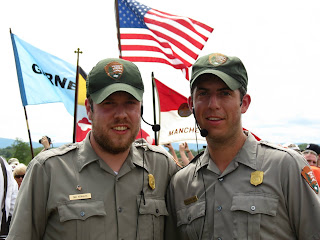 Thanks again to Mannie for this shot. Chris and I after the walk, with the Garnett and American flags behind us. Chris is a good friend and I was very fortunate to work with him on this event. We can say that we led more people across the fields of Gettysburg than Garnett himself did!


Stay tuned for a few more pictures from Gettysburg 150 to come.
Posted by Dan Vermilya at 9:00 AM