NPR Story on Unknown Soldiers of the Civil War


I came across this story (link is above) and thought it was worth sharing. It comes from Georgia, where a researcher claims to have identified an unknown grave on the Kennesaw Mountain Battlefield. Given my particular interest in this battle and this campaign, I had to look into it. The grave which is discussed is the one which I photographed while visiting this site this past January. 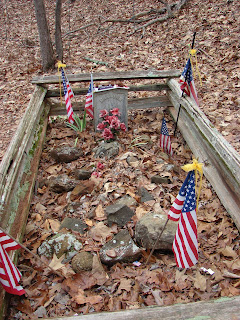 The story discusses unknown soldiers during the Civil War and how some are still searching for their identities. The main focus is on Brad Quinlan, a researcher who is claiming to have discovered the identity of an unknown soldier still buried on the Kennesaw Mountain Battlefield. Quinlan is suggesting that this soldier was "Mark Carr, 34th Illinois, 21-year-old day laborer and farmer from just outside of Dixon, Illinois." He arrived at this conclusion through studying first person accounts from the National Archives, as well as doing a process of elimination through various regimental records.

While this story is quite interesting, I have some doubts about these claims. Without further details on how this conclusion was reached, it is impossible to say with any degree of certainty, barring DNA testing, who is buried in this grave. There were dozens of Union regiments which fought in this area, making it difficult to pinpoint the 34th Illinois as the only unit whose dead fell on this spot. Nevertheless, it is an interesting story.

Stories such as this one remind us that far from the romanticized war of film, art, and tourism, the Civil War itself was a terrifying ordeal for the men who endured it. It remains important to remember that the Civil War was so brutal and vicious that some individuals simply ceased to be known as a result of it. Not only could the combined effect of shot and shell dissolve bodies with their force, but severe wounds could make recognizing and identifying soldiers difficult, and strange terrain could make finding some bodies impossible. Thus, when traveling to Civil War battlefields, remember that they still serve as cemeteries for men from both sides, and they should be treated accordingly.
Posted by Dan Vermilya at 6:08 PM