Prayer at the Dedication of the 125th Pennsylvania Monument at Antietam

One theme which you will notice on this blog from time to time is the discussion of the religious history of the Civil War. There is no doubting that the generation which fought this war was a Christian generation. Soldiers used their faith to understand what they saw and did in battle, and their abiding belief in a Christian God helped them to justify the causes for which they fought. It is not uncommon to read memoirs and letters of soldiers and to find continual discussions of prayer services, Christian revivals, and references to the eternal fates of those who had fallen in battle.


In the course of researching various units at Antietam, I recently came across some of the speeches and ceremonies from the dedication of the 125th Pennsylvania monument. Located behind the Dunker Church, the monument depicts Color Sergeant George Simpson of Company C from Huntingdon, Pennsylvania with the flag he was killed while holding during the battle. This regiment, recruited from Huntingdon, Blair, and Cambria counties in August, 1862, received its baptism by fire in the West Woods at Antietam. The story of the regiment is a fascinating one, as these men had just left their homes and loved ones behind when they suffered the terrible experience of battle on September 17, 1862. A part of the 12th Corps, the 125th PA moved southwards along the Smoketown Road, entering the West Woods and holding their position for some time before being pushed from the field by the brigade of Jubal Early’s men. The 125th PA was one of the only units of the 12th Corps in the West Woods at the time of the Confederate counterattack on that position, and they would lose heavily that day. Starting the day with 700 men present for duty, the losses of the 125th PA came to 54 killed and mortally wounded, 91 seriously wounded, and 84 slightly wounded, totaling 229 casualties.

The following selection is a prayer which was given at the dedication for this monument on September 17, 1904. I found it to be quite moving, and thought it was worth sharing.  It was given by Dr. Theodore L. Flood, a former Lieutenant of Company C., 125th Pennsylvania. 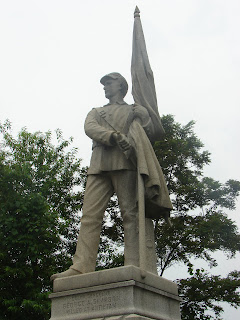 O God, our Father and the God and Father of our Lord Jesus Christ, we bow our spirits and worship Thee on this ground, consecrated by the blood of our comrades and friends, and where many of us faced death itself that we might perpetuate this nation. We give Thee thanks that we live to see this day—that we may come together to speak of the deeds of valor and of the noble men who fell in our regiment and in our great army on the day of battle more than forty years ago.

We thank Thee that thou didst direct our fathers in the early days of our Nation’s history, and that Thou didst give them wisdom and courage to lay the foundations of this Republic. We give Thee thanks for the wisdom and statesmanship of the great men who perpetuated this nation by their wise action in the halls of Congress, and in the Executive Mansion at Washington. And when we think of the battles that were fought in the Civil War, the defeats that were suffered and the victories won, we raise our hearts to Thee in thanksgiving for the victory achieved on this battlefield, and we thank Thee for the noble part our regiment was permitted to take in that conflict.

And, now, we return to Thee gratitude that so many brave men who fought here survive until this day. We beseech Thee to bless the widows and orphans of our comrades who fell in that battle. Bless all the comrades who remain, and may our gathering to-day be an inspiration of patriotic devotion to our country, and may we here at the altar of liberty, which has been an altar of sacrifice, consecrate ourselves anew to the preservation of this Republic and to the perpetuation of free institutions.

Inspire the men who shall speak on this occasion, and may we all carry to our homes an increased love for our country, and our country’s flag.

Bless our army and navy, the President of the United States and his Cabinet and our National Congress. Bless the Governor of this Commonwealth and our State Legislature. Guide us all in the way or peace that we may never again be called to engage in civil strife, but that we may keep the unity of the spirit in the bonds of peace.

These blessings we ask in the name of Jesus Christ our Lord. Amen.