Why did they fight that way: Foolishness or Courage?


Last weekend, October 8th and 9th, living history volunteers portraying the 8th Ohio Volunteer Infantry were at Antietam as part of a living history weekend. Among the programs that were offered were several infantry firing demonstrations by the volunteers portraying the 8th Ohio. Their demonstration was a nice primer on Civil War tactics at the company level.


The relevance of these tactics to our understanding of the Civil War goes far beyond how troops moved on the battlefield and how certain positions were taken on different fields. They speak, in part, to how we understand the men who fought during the war. For more thoughts on this, see the last few paragraphs of this post.


First, a few photographs and videos of firing demonstrations done by the men of the 8th Ohio Volunteer Infantry living history group... 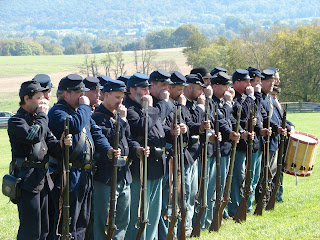 First, the powder cartridge must be torn. For this, a soldier required two of the most important tools needed to fight in the Civil War. In fact, these tools were so important that if one did not have them, he was disqualified from serving in the infantry. Those tools, of course, were one's two front teeth. 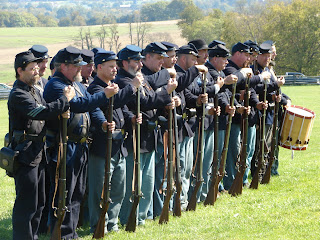 Next, load the cartridge into the musket by pouring in powder and ball. 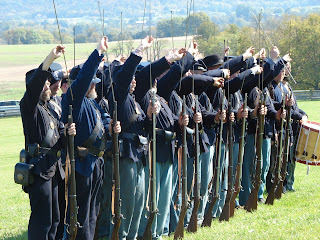 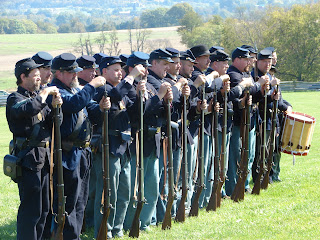 Cartridge is firmly pushed into the barrel of the musket 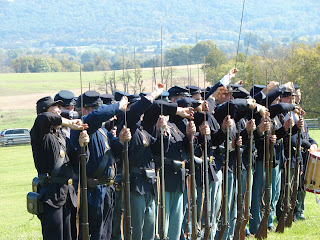 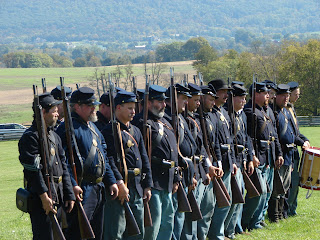 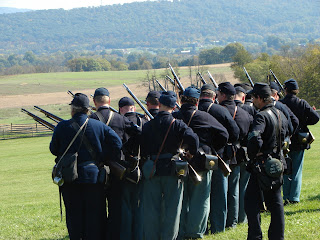 Percussion caps are added to provide the necessary spark and... 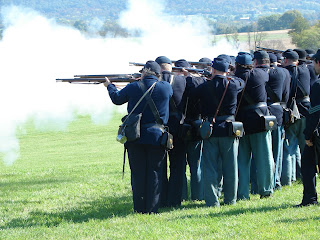 Now, all that remains is repeating the process and doing so faster than your enemy. As is commonly said, a good infantryman could get off three well aimed shots in one minute.

The first video shows firing by file, allowing for a rapid and continuous rate of fire.

The second video is firing by rank, allowing for a more concentrated rate of fire.

Perhaps one of the most frequently asked questions by visitors to Antietam is why these men fought they way that they did. Invariably, at least once or twice a week, upon emerging from our Visitor Center theater where they viewed a film with reenactments of battle scenes, someone will say, "I just can't imagine why those guys marched at each other in straight lines. Didn't they know they would all die? Were they stupid or something?"

When trying to understand people who lived 150 years ago, stupid is the last word one should use in starting an inquiry. In fact, let's remove it from our historical dictionary altogether. Very few, if any of these men, acted as they did out of stupidity, whether they were generals or common soldiers.

So, if not stupidity, why would these men march in lines of battle across open fields against opposing lines of infantry with artillery batteries hitting them with shot, shell, and cannister? It was bravery, courage, and love for cause, comrades, and country.

Perhaps, instead of asking ourselves, "How stupid were those guys that they marched in a straight line to their deaths?", we should ask instead, "What caliber of man, and what kind of bravery and courage was it that led those men to march into battle, and for some, into death?" In asking ourselves this new question, we can both better understand the men who undertook these harrowing tasks as well as learning the true meanings of words such as patriotism, bravery, courage, duty, and freedom.


The difficulties of Civil War tactics shed light not only on the weaponry and the fighting style of armies in the Civil War, but they also shed light on the special qualities of courage and bravery which permeated the ranks of both sides. Simply put, the Confederate soldiers who launched Pickett's Charge at Gettysburg and the Union soldiers who assaulted the Sunken Road at Antietam weren't foolhardy; they were incredibly brave.