I will have plenty more to post and share in the days to come, but for now, let me simply say that commemorating the 150th Anniversary of the Battle of Antietam by working out on the battlefield and leading programs for 13 hours as a park ranger was an experience I will never forget. I am forever in debt to my friends and colleagues at Antietam National Battlefield, as well as those rangers from other NPS sites who came in to work with us this weekend.
At the end of the day, I was able to take part in the reading of the names of those who died by reading the name of my great-great-great grandfather. Here is a link for a special photo album on the ANB facebook page with pictures of the moment.
The following pictures are just a small glimpse of how special today truly was... 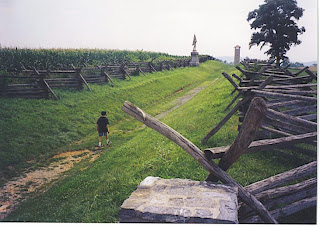 ﻿
Ranger Dan in the Sunken Road at age 9﻿ 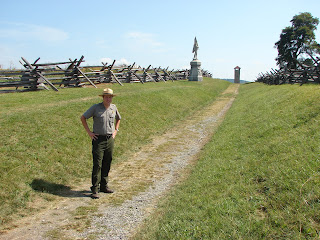 Ranger Dan in the Sunken Road at age 25, taken on September 17, 2012, the 150th Anniversary of the Battle of Antietam 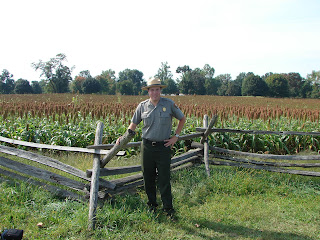 The picture above was taken today along the fence line where, 150 years earlier to the very moment from when the photo was taken, Private Ellwood Rodebaugh was last seen making a desperate stand with members of the 106th Pennsylvania Volunteer Infantry﻿
Posted by Dan Vermilya at 9:42 PM