150 years ago today, George Brinton McClellan officially assumed command of all Federal forces defending Washington D.C., including both his force of the Army of the Potomac and John Pope's Army of Virginia. 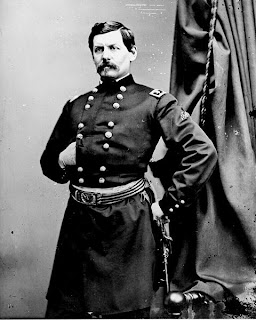 I was surprised this morning when at breakfast by a visit from the President and Halleck--in which the former expressed the opinion that the troubles now impending could be overcome better by me than anyone else. Pope is ordered to fall back upon Washington and as he reenters everything is to come under my command again! A terrible and thankless task--yet I will do my best with God's blessing to perform it. God knows that I need his help. I am too busy to write any more now--Pray that God will help with a full knowledge of all its difficulties and of the immensity of the responsibility. I only consent to take it for my country's sake and with the humble hope that God has called me to it--how I pray that he may support me!...
Don't be worried--my conscience is clear and I can trust in God

The Civil War Papers of George B. McClellan, edited by Stephen Sears, pg. 428.


Later that day, in the mid afternoon hours of September 2, George McClellan put on one of his finest uniforms. He looked resplendent, with a bright yellow sash, golden trim, and his dress sword surrounding the dark blue of his Federal coat. He began riding out to the outskirts of Washington, where he would meet the remnants of Pope's defeated army as they slowly streamed back into the city.  By 4 pm, McClellan had reached Upton's Hill, where he met John Pope, at the head of a column of defeated Union troops. After informing Pope that he was no longer in command, the defeated commander continued his dreary ride into Washington. Simultaneously, men of John Hatch's division of the 3rd Corps, Army of Virginia, had overheard McClellan's conversation. Cheers began erupting up and down the ranks as men jubilantly celebrated the news that "Little Mac," their beloved general, would once again lead them forward into battle. The scene must have been quite dramatic: a defeated John Pope, hanging his head as he rode back into Washington; exhausted, but excited, soldiers cheering their new commander; and George McClellan, in his finest uniform, sitting atop his black horse, "Dan Webster", observing the scene with the pride of knowing he was once again in command, but also knowing that the job ahead of him was, as he wrote his wife earlier that day, "a terrible and thankless task." While these soldiers were cheering now, it would be McClellan's job to turn this force around, transforming it from a defeated and disorganized army into a force capable of defeating Lee and saving the future of the Republic. 150 years ago today, Major General George B. McClellan's work was just beginning.